„Team Advantage was well represented at the Sempachersee Triathlon with Sara, Cedric and Olivier.

All participated in the Triathlon Experience category, the only difference with the Triathlon Competition category was a shorter swim of 500 meters instead of 750 meters.

The Sempachersee short-distance triathlon is a great race to have a first triathlon experience. The swim starts in waves of two participants each 15 seconds, there is therefore not the same stress as a mass start, and the swim is also in a full straight line so there not much orientation to worry about. The bike part is a bit hilly but combined with the wave start at the swim it means that there are no pelotons. The bike part was also fully secured with no cars on the road. The run is two laps with no difficulties.“ 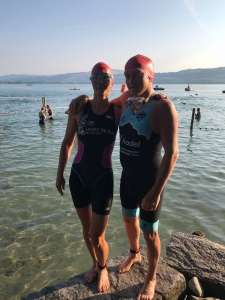